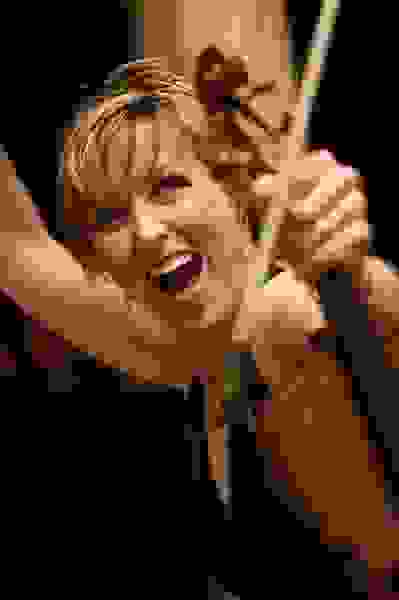 Renae' Truex was born and raised in the small town of Moundsville (12 miles south of Wheeling), deep in the mountains of West Virginia, where she grew up listening to her grandmother playing guitar, her father playing the fiddle and tuning into radio shows such as "The Wheeling Jamboree" and "Mountain Stage." At age of fifteen, Renae' began fiddling around on her own, falling in love with various types and styles of music, listening to the likes of violinist Deni Bonet (www.denibonet.com), Jean Luc Ponty, Stephane Grappelli, Vassar Clements, Mark O' Connor, Johnny Gimble and bands Kansas, The Dixie Dregs, Alabama, Charlie Daniels Band and many others.

After a couple of extremely encouraging and successful trips to Nashville, Tennessee and getting to play on Earnest Tubb's Midnight Jamboree, making an appearance on Ralph Emory's Nashville Now (TNN), appearing with Steve Hall And Shotgun Red and getting to meet and play for the late great Roy Acuff, she knew exactly where she wanted to be.

She's had many appearances on The Grand Ole' Opry throughout her time in Nashville, as well as The Ryman with different artists.

She has also taken part in various TV appearances playing on shows such as "Nashville" and "Can You Duet" and most recently "Austin City Limits (Sept. 2019)."

In 2003, Renae' along with several other very talented ladies formed the band "Cowboy Crush", holding their first practice in the keyboard player's garage! They signed a record deal with Curb Records and went on for many years, touring both in the U.S. and all over the world, making appearances at The Grand Ole Opry, The Ryman, and getting to perform at one of Renae's founding roots, "The Wheeling Jamboree."

They were recognized as Country Music Ambassadors for the "National Museum Of Patriotism," in Atlanta, Ga., alongside Patty LaBelle and Lee Greenwood and were included in one of the exhibits. They also received honors for the CMA Wall Of Fame. Some of their releases include: "Nobody Ever Died Of A Broken Heart," "Hillbilly Nation," "Miss Difficult," "He's coming Home." Their album release in 2009 was titled "Cowboy Crush."

In 2006, Renae' found herself venturing outside the country music fiddle market and found a love for writing and performing instrumental music, exploring the journey that she could take the fiddle/violin on. From there, she and co-writer Jody Alan Sweet formed a project called "Jonae'." You can hear their music now on various TV commercial and film spots, places like MTV, A&E, History Channel, TLC Channel, to name a few. The project currently has six albums out and counting!

She also performs the music live at events and listening rooms everywhere, taking people on a journey with this music.

When not touring in the US or abroad, you can find Renae' either in a studio recording on various records for different artists and songwriters and playing in Nashville downtown in the various honky tonks on Lower Broadway, cutting up, fiddling, making music and memories with her friends and making sure that those who are visiting are taking great memorable experiences and smiles back home with them.